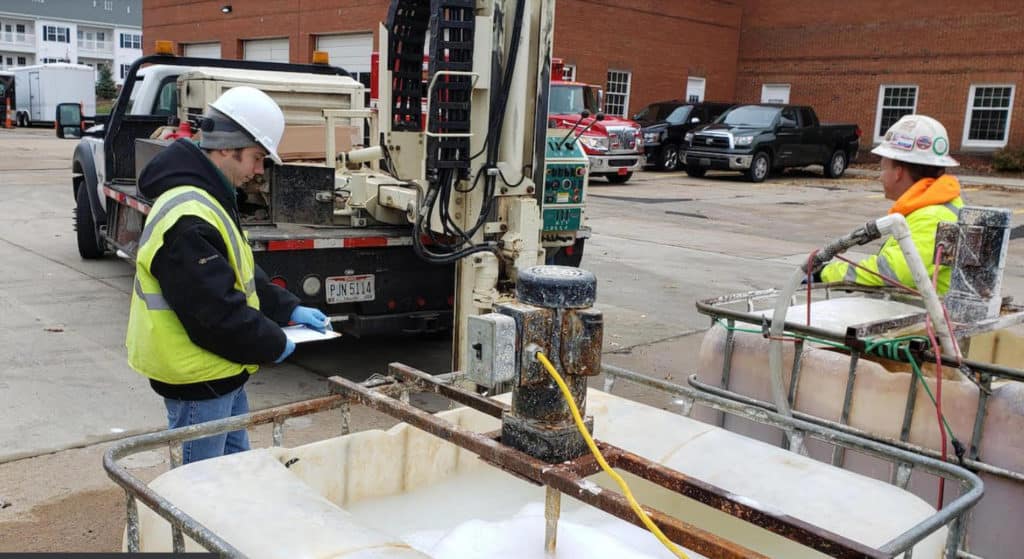 The Twinsburg Police and Fire Department property was the former site of a gas station used to fill up the city’s vehicles. For more than two decades, the city has been wrestling with a leaking tank issue that has been contaminating local groundwater.  The underground fuel tanks were removed in 2016, but petroleum compounds remained above acceptable levels in the groundwater, according to information provided by the company.

The City of Twinsburg, Ohio engaged Phoenix Environmental to assist with the investigation and remediation of the petroleum impacts at a site they have been dealing with cleaning up for almost 20 years due to a leaking underground storage tank system.

Based on the previous assessments completed to date and our historical knowledge of the property, the source of the petroleum impacts (limited to benzene in groundwater) originated from the former underground storage tank system at the Property.  This UST system was removed in 2016 by Environmental Management Specialists (EMS).  Phoenix was engaged by EMS to provide sampling and closure assessment assistance.  wo groundwater monitoring wells at the Property (MW-3R and MW-8) have concentrations exceeding the BUSTR action limit for benzene.  This RAP was prepared to implement remedial action to achieve conditions in the groundwater that will allow a No Further Action status to be granted for the Property by BUSTR.

Phoenix was engaged to conduct a BUSTR Tier 1 source investigation and source delineation of the property.   Results of these investigations indicated the following:

Using information from these investigations, Phoenix Environmental developed cost-effective, treatment strategies for the client.  The most economical approach was targeted in situ chemical oxidation (ISCO).

Phoenix engaged Enviro-Core LTD (Enviro-Core), an independent drilling contractor, to install seven (7) injection points at the property.   The borings were installed using a Geoprobe drill rig to 20 feet below ground surface in each location.  The locations of the injection points were selected based on the prior Phase I ESA report, Phoenix Environmental’s Phase II information, locations of existing structures and accessibility of drilling equipment.

Remedial activities began when Enviro-Core injected ~1,200 gallons (~133 to 193 gallons per injection point) of a calcium peroxide solution into the uppermost aquifer between 16 and 20 feet below ground surface.  Calcium peroxide is a treatment method that produces

a controlled release of molecular oxygen designed to assist in the aerobic bioremediation of hydrocarbons in soil and groundwater.  Calcium peroxide stimulates natural degradation of petroleum hydrocarbons. The high ratio of oxygen released provides a long-term oxygen source for up to 12 months upon hydration under ideal conditions.  This sustained release of oxygen stimulates indigenous bacteria, accelerates bioactivity, and promotes increased contaminant removal.  The treatment compound was provided in concentrated form and a potable water source was needed to mix the appropriate ratio. Additionally, 1.5 gallons of TersOx Accelerate was mixed with water and added to each injection point.  TersOx Accelerate is a food-grade, hydrogen peroxide solution.  Following each injection, the borehole was backfilled with bentonite to grade.  The surface at each borehole location was patched with asphalt or concrete depending on the surface material.

Results from the sample analysis and groundwater parameter measurements indicated a significant decrease in concentration of COCs and an increase in oxygen within the groundwater within the treatment zone.  Following the remedial activities, Phoenix conducted post-remedial sampling activities to gauge the effectiveness of the treatment.

Phoenix returned to the site in the fall of 2018 and collected a second round of groundwater sampling.  In the August sample from MW-2:

Confirmation testing indicated no detections of petroleum compounds in the post-remedial groundwater samples collected, indicating a successful remediation of the site.  Following completion of the remediation activities, the developer was able to proceed with their purchase and subsequent redevelopment activities.